*Possessive forms also may be derived by the suffix -no, -ino: mino or minano, nasino, tano, gono, etc. like that, or with the preposition de.

Days of the week 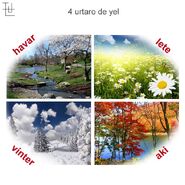 Add a photo to this gallery

Retrieved from "https://ial.fandom.com/wiki/Seytil?oldid=5658"
Community content is available under CC-BY-SA unless otherwise noted.